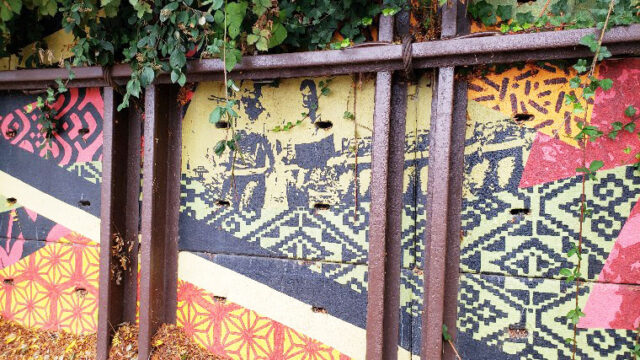 Nakano Associates went on a field trip through the Danny Woo Community Garden in September 2021 to learn about its 50+ year history and the cultural significance it has in Seattle’s Chinatown International District (C-ID). I had the privilege of working as the garden manager after I finished my master’s degree in landscape architecture, and it remains my favorite place in Seattle. This tour was a great opportunity for me to reflect on the garden’s design history in the company of landscape architects.

Initially created in 1975, the garden was built by Asian American activists on steep undeveloped land owned by business owner Danny Woo. It was built in the spirit of the 70s, in parallel with the protests against encroaching developments that threatened the livability and vitality of the diverse neighborhood. It remains a cultural cornerstone and multipurpose gathering space for the Asian American community today, and is also recognized as a hidden gem for tourists and visitors from all over the world. It provides over an acre of land for elders to grow food from their home countries and today about 75 gardeners – most of them immigrants from China, Taiwan, Korea, and Vietnam – continue to grow vegetables otherwise difficult to find in affordable grocery stores.

The C-ID has the largest concentration of impoverished elders in Seattle, and the garden plays a key role in increasing culturally appropriate food access to low-income residents. The garden also provides a space for elders to exercise, relax, and socialize, which is key in a neighborhood with disproportionately high rates of diabetes, heart disease, and depression. Every year the garden feeds the seniors who grow food, and they in turn feed their friends and families, but the garden also provides connection to culture and identity, which is nourishing in a different way.

Depending on the season, you’ll find Chinese melons or long beans hanging from trellises; chrysanthemum, amaranth, goji berries, or celtuce growing in neat rows. The garden also has one of the oldest and most diverse fruit orchards in the city, with over 60 fruit trees ranging from plums, Asian pears, cherries, apples, and figs. The fruit is available for anyone to pick and enjoy. If you know your Asian vegetables well enough, you might be able to tell what country the gardener is from by looking at what they are growing in their plot.

One of my favorite memories from working in the garden was getting to know Halmoni (“Grandmother” in Korean), a 92-year-old Korean gardener who showed me the medicinal and culinary (usually one and the same) herbs she grew in her garden. I never got the chance to learn cooking from my own Korean gramma, who passed away when­ I was a child. Halmoni was happy to teach me and feed me, just as I enjoyed teaching youth how to make kimchi and ssam with garden herbs and veggies in our educational programs. Inter-generational and cross-cultural exchange happens naturally in this densely planted garden, especially if you are curious, friendly, and love food.

Because the garden is managed by the InterIm Community Development Association in partnership with volunteers and gardeners from all walks of life and countries of origin, the aesthetics of the garden reflect many perspectives, with a variety of projects implemented over many decades. For me, this people-powered landscape is what makes it the best public space in Seattle. It is a physical manifestation of 50-years of intentional and unintentional community organizing and Asian American design.

The garden entryway torii gate and arbor were designed and built by SHED Architecture and Design in the early 2000s, heavily influenced by Japanese garden design. Even though there are no Japanese or Japanese American gardeners active today, this architecture honors the legacy of Japantown, or Nihonmachi, which used to stretch over 22 blocks from the C-ID to the Central District. The Japanese American population was drastically reduced after the imprisonment of all Japanese and Japanese American citizens during World War II, and the neighborhood was changed forever afterwards.

In total the garden reflects the district’s diverse pan-Asian community. The roasting pit that is used for the annual pig roast comes from the late activist “Uncle Bob” Santos’ Filipino heritage, and there are at least 7 dialects spoken in the garden, mainly Cantonese, Toisanese, Mandarin, and Korean. The garden’s logo are the characters 一心, “issin”, which means “one heart” in Chinese, Korean, and Japanese.

The first Japanese-influenced structure built on site was a toolshed in the 1980s, a design-build from the University of Washington’s Architecture school. Last summer an additional toolshed was built in collaboration with Sawhorse Revolution, AIA Diversity Roundtable, and W.I.L.D. (Wilderness Inner-City Leadership Development) youth. The students learned design basics, carpentry, and even shou sugi ban – an ancient Japanese technique for waterproofing and preserving wood involving charring the cedar wood surface with fire.

Many have told me that the Danny Woo garden reminds them of their grandmother’s garden, or reminds them of their travels to East or Southeast Asia. Aside from the professionally designed structures, fences, and railings that frame the pathways and entrances, some of the most striking and unique forms come from the gardeners themselves. When visitors come to the garden for the first time, most people are struck by its old country look and feel. Trellises are made from discarded pallets, scrap wood, and even metal taken from bed frames or crutches. Used plastic buckets are a common sight, overflowing with pungent compost tea (made with the traditional anaerobic method used in rice paddies) to ensure that every inch of their garden is productive. Gardeners will use materials that are free and easy to procure to build their garden.

Because it is in an allotment-style, individuals or couples design their plots with their personal – yet practical – touches, where form follows function. Each garden is as unique as each gardener.

A few years ago I taught a class with high school youth from the W.I.L.D. youth program and the University of Washington Landscape Architecture department. Students created gorgeous renderings that re- imagined how new patterns and bright colors could transform the garden plots and make it more beautiful and inviting for visitors. But when we presented our ideas to the gardeners, the majority of them wanted to keep the fence design simple and cost efficient. They weren’t as interested in the artistic flourishes we proudly dreamed up. In the end- to please our elders- we ended up basing our design to mimic the spacing and height of wooden pallets gardeners already used. Some of us were disappointed in the gardeners’ aesthetic choices, but the final design saved us money, time, and most importantly maintained the authority of the gardeners.

While the gardeners maintain autonomy in their plots, I was interested in adding a few art pieces throughout the garden. Local artist Alessandra Panieri donated a (gardener-approved) red 15’ steel flower sculpture and installed it in the Children’s Garden in 2017, and in the summer it is surrounded by a circle of sunflowers, nasturtium, torch flower, and borage planted by preschoolers from El Centro de la Raza.

In 2021 the W.I.L.D. youth designed and built a rain garden, and above it we installed donated pieces from artist Miya Sukune’s ‘Feast’, steel cut panels of Asian comfort foods, including bún and bubble tea, a teen favorite. The rain garden, which primarily functions as an educational and demonstration garden, also filters overflow from a 660 gallon cistern that collects rainwater from the toolshed roof.

A beautiful mural at the base of the garden on a retaining wall was painted by Tacoma-based muralist Kenji Stoll in 2018. The colors and shapes were inspired by Japanese candies from Kenji’s childhood, and the patterns are textiles from different cultures represented in the International District. Historic images of Nihonmachi and the creation of the garden flank the middle of the mural with the character 一心. This mural, like almost everything in the Danny Woo Community Garden, was created with the help of volunteers, gardeners, and youth, in the spirit of “one heart”.

The Danny Woo Community Garden is located at 620 S. Main Street Seattle, WA 98104. It is free and open to the public from dawn until dusk. For more information you can visit their website at www.interimcda/danny-woo/.